How to speak publisher: F is for frontispiece

This is not a word publishers say a lot. But I think frontispieces should make a comeback. 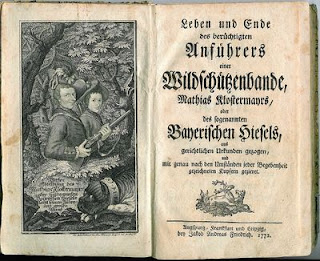 The frontispiece is the illustration at the start of a book, facing the title page. It's not the same as decorated endpapers or an illustration the title page. It's a little advertisement for a book. It was used in the days before blurbs on the back cover, self-puffing on Twitter, and Amazon reviews to give people a flavour of the book. It was the equivalent 'I've just published my book, why not buy it? #mybookisgreat' tweet, but more intelligent - it had to encapsulate what the publisher thought would attract a reader to the book, but using a picture to advertise a book that was entirely prose.

Sometimes the frontispiece is a picture of author. That's a bit dull. But if the author is already known, it's an incitement to keen readers to read this book, too. I'm not showing those here. You know what authors look like.


A picture of the subject of the book is more interesting. This is a portrait of Lavoissier from a book called Elementary Chemistry, published in 1905. Below the portrait is an unfortunate scene - Lavoissier being interrupted in his laboratory by officers of the Revolutionary Committe, shortly before he was executed by guillotine. This makes chemistry look a more exciting and dangerous pursuit than many might immediately suppose. Why Lavoissier? Well, he was considered the 'father of chemistry'. It's an aspirational picture in a way - elementary chemistry is the first step towards being Lavoissier. Preferably without the sticky end, but hey - chemistry is exciting and dangerous. You could blow yourself up at any moment. 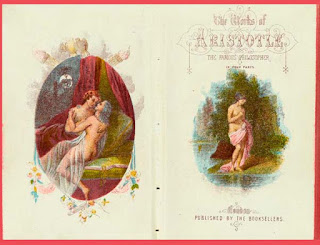 But a frontispiece can go further than that in misleading the reader. How about this one? It's the frontispiece to an edition of the works of Aristotle (c.1850). Now, I've just finished writing The Story of Philosophy, and I can assure you that Aristotle did not write one single raunchy novel - or not one that has survived. If ever there was a frontispiece that could be deemed misrepresentation, this is it. The volume contains Aristotle's Directions for Midwives, and includes Counsel and Advice to Child-Bearing Women (in Victorian English terminology). I suppose the nude-woman-geting-into-bed-with-a-man stage is a necessary prerequisite for the midwifery stage. But even so. Hardly legal, decent, honest and truthful. Or indeed any of them. It would fall foul of modern advertising standards.It would be generous to assume the lady on the title page is considering a water birth. I think it's just a gratuitously scantily-dressed lady. 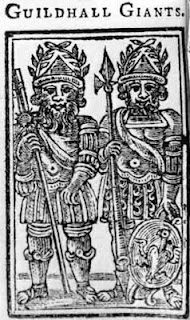 Some are honest representations of what the book is about. That's easier if the book sounds exciting anyway. This is the frontispiece of a book called The Gigantick History of the Two Famous Giants, and Other Curiosities in Guildhall and published in 1741. Looks good - I'd buy it. 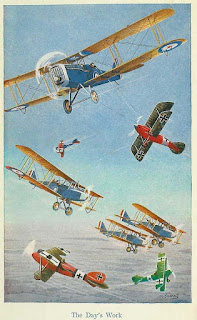 Here's a book that might be exciting if it lives up to the promise of the frontispiece. It's from a book called Wings: A book of flying adventures by W.E.Johns (1931). That's quite a mix of British and German planes - it would certainly have been an adventure. In fact, W.E.Johns did a good line in frontispieces. (He's the Biggles chap.)

I've looked through some of my own books (books that I wrote, rather than that I own) and there are none with frontispieces except a couple of editions of historic texts. A few have a title page illustration that extends over the facing page, but most just have copyright information on the page opposite the title page. It's a shame - I'd rather have a frontispiece than a cover blurb (as long as it doesn't show my photo). Please, publishers, can we go back to frontispieces?
Posted by Stroppy Author at 10:21

Labels: frontispiece, How to speak publisher