Sex for sale - or not

Who do you think should choose which books we can buy? Children's writers are used to the frustration of trying to satisfy the gatekeepers that sit between writer and reader - the parents, teachers, librarians and school boards (especially school boards) that decide whether books can ever reach the hands of children. The views, or anticipated views, of gatekeepers influence publishers' decisions about what to publish and what can be included in a book.

But what about adult publishing? Surely adults should be free to choose their own reading matter without gatekeepers intervening? As long as the content of a book is legal (so not deemed obscene, blasphemous, libellous or anything else against the law), we can buy it, right? Wrong. Readers and writers are increasingly at the mercy of self-appointed moral guardians, particularly Apple and Amazon - those very organisations that have been in trouble for exploiting workers and avoiding taxes. Those moral guardians.

In a move that has largely slipped under the radar, Amazon has dropped a lot of books with adult (ie sexual) content from search results. As far as I'm aware, they haven't dropped violent content - so you can still find American Psycho but not Fifty Shades of Grey. I know which book I consider to be more offensive, and it's not Fifty Shades. But that's irrelevant - neither book has illegal content, so it should be available to people who want it.

It's not that Amazon won't sell adult books - but that they won't show up in general search results. You need to know the title you want, then you can buy it. How often do people who buy erotica search by title? I don't know, but reports from publishers of erotica suggest not many as this has hit their business hard. Of course. The rise of Amazon, and then ebooks, saw a boom in sales of erotica. People who were embarrassed to buy erotica in a public bookshop - always assuming they could find it - could buy it privately online and it would come in a brown box that just said 'Amazon' all over it. And then they could buy it on their Kindle or KindleClone and no one could see they were reading it.

Not one to take rumour at its word, I searched Amazon for 'erotica'. 120,000 hits, near enough, in both UK and US. It sounds like a lot, but it's fewer than I would have expected. And 'erotica' is not exactly a general search. A lot of self-published steamy novels. In the UK, the second hit was a book by Goethe. Yes, that Goethe - the German author of Faust who's been dead more than 200 years. *Second* in erotica. I suppose Amazon filters results by my known preferences, and I've bought more books by dead Germans than erotica, but even so... Fifty Shades didn't feature on the first page in either .co.uk or .com. I searched for 'whipping' and got a recipe book, a few saucy Kindle offerings, a book about politics (UK use of the term 'whip' to mean pushing politicians to vote along party lines) and, number 1, an academic book on scapegoating of transsexual women. God knows what this is doing to my Amazon profile.

As The Telegraph pointed out, whatever you think of Amazon trying to invade the moral high ground, that's just a stupid business decision. Amazon is throwing away sales of a book people can - and will - buy in the supermarket.

But I don't care if Amazon loses business - I care deeply that publishers and writers can't get their legal content out to readers who want it unless the reader knows the title in advance. How are readers going to find out about books they haven't heard of? They might have favourite writers, they might have friends who make recommendations, but a lot now rely on the links Amazon makes for them.

Of course, Amazon has encouraged self-publishing through Kindle and that's a route many writers of erotica have taken. No doubt many of those erotic novels are not very good, but Amazon isn't judging on the quality of the writing - it's just saying 'No sex, please, we're American'. There are writers and publishers who have businesses built around the model Amazon pushed at them who are now having their books dropped from searches and, in some cases, dropped from Amazon completely. Barnes and Noble also have filters, but not as harsh, it seems. As for Apple - they've been known to be highly prudish about what they will allow on iTunes for ages, but that squeaky-clean, teen-puppy look is part of Apple's public image (however disingenuous) so it's less surprising.

Amazon doesn't tell readers that it's operating a filter and that there might be more books that match their search which are not displayed. And, worse, it doesn't tell publishers and authors when their books have been marked for filtering. This means they can't appeal if they think the filter has been wrongly applied, and it means they don't know that they should just take their book elsewhere. Self-published authors can at least see their sales figures fall off a cliff and might guess, but those who have to wait for royalty statements to see sales can lose up to 9 months' income before they even have a clue.

Amazon's monopolistic position in the market means it can dictate how writers make their living (and which writers can make a living) and what adults can read. Writers and publishers who can't sell through Amazon will really struggle to make a success of their work. That can't be right. Who are Amazon to tell people what to write and what to read? It's not as though they have a great reputation for moral behaviour themselves.

I don't write, buy or read erotica. I have no personal interest to disclose. But I'm a writer and a reader and want my books and those by others to be freely available - or at least to be told when they are not. Is that unreasonable?
Posted by Stroppy Author at 08:47 7 comments:

My visit to the abbatoir - by A Cow

An author visiting a book fair has been likened to a cow visiting an abbatoir. But I'm sure that was said by someone (in publishing) who thinks authors should sit at home twirling their pens and not knowing anything that undermine their potential for being exploited and lied to.

So here's a little photo essay (more essay than photo) about What I Did in My Easter Holidays.

I'm not going to bore you with meetings. I took photos of the stands of some of my publishers. I didn't have meetings with all these, and I also had meetings with some I didn't photograph. 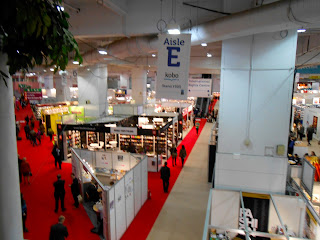 Call me stupid, but I hadn't realised before that it's the red carpet that tells you you're still in the children's books zone - which is where I spend a lot of my time. 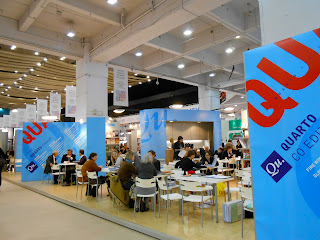 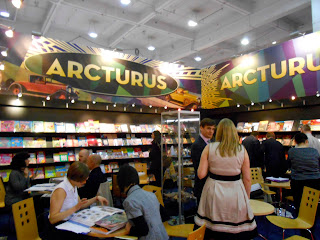 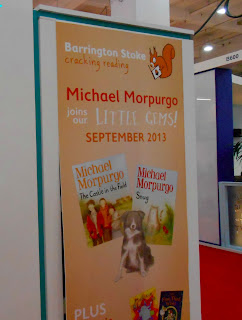 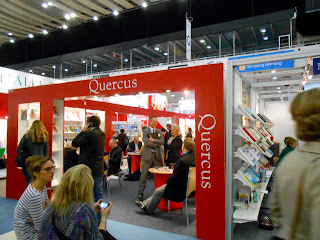 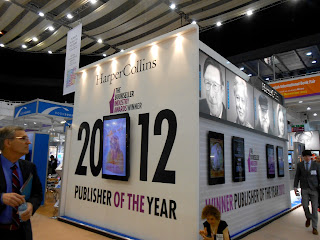 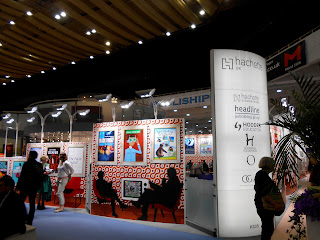 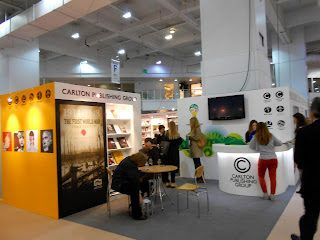 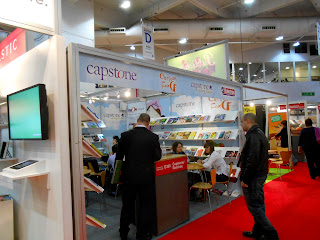 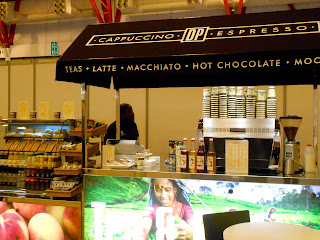 Ransom! A shared stand, but all meetings at this little coffee bar in Hall 2 (yes, hiding from the real book people).

I didn't bump into quite as many people as usual, but possibly because I had seven meetings on Tuesday (fewer Monday and Wednesday) and so not much walking around time. But there was one bumping-into (won't name and shame) which led to rather too much drinking in Old Brompton Road when the fair closed on Wednesday, and so to me staying an extra night in London.

The best part of all was staying with other writery friends in the fantastic apartment of one of them, overlooking the Thames. Super food, wonderful company - and the Fair was a bit of a distraction, really....

Dead witches, past and present

I'm not going to blog about the death of Thatcher - there's enough of that about. But it is a trigger: there has been lots of public display and speaking-out. I find celebration of anyone's death distasteful and demeaning (to the celebrator), but the acceleration of Ding Dong the Witch is Dead up the charts is an interesting display of the public turning to art as a means of social protest and expressing dissent. Who'd have thought The Wizard of Oz would end up as social satire? (Well, Henry Littlefield, who believed it started as political satire on 1890s Populism: "The Wizard of Oz: Parable on Populism", American Quarterly 16 (1): 47–58)

Thatcher provided a rich seam for satirists during her years in office. Fortunately, whatever else we think of Britain, we do have a society in which artists are relatively free to write political satire. We won't be sent to a gulag if we write an allegory of some political or social abuse. In children's books, satire and allegory are considered dodgy, dangerous, insidious. Many people criticise the Narnia books because of their hidden, right-wing, Christian agenda. But right-wing Christianity was the dominant ideology of the time, so Lewis wasn't doing a whole lot more corrupting than mainstream schools were - it's the concealed nature of the message that makes people anxious. Still, the Chronicles of Narnia are allegorical rather than satirical: not all allegory is satire (though a lot of satire is allegorical).

Lewis might have felt Christianity was under threat, but it was hardly in its death throes in the 1950s. Often, allegory and particularly satire are the voice of the powerless or of those who want to say something unpopular. Arthur Miller didn't write about witch-hunts in The Crucible without regard to the McCarthy witch-hunts of the 1950s (though astonishingly the Wikipedia entry on The Crucible doesn't mention the satirical aspect of the play).

(Have you noticed how all these use witches? Bit lazy, isn't it?)

Don't we all, to some degree, put our own political/religious/moral views into our books? Or raise the questions we think children need to think about?

Raising questions is not telling someone what to think, but any group that is aware of its fragile hold on the public, or aware at some level that there is something wrong with its policies or promoted beliefs, always takes raising a topic for discussion as a form of attack. After all, if everyone was happy, we wouldn't need to examine it, would we? Except we would, because that's how we make sure whatever we have chosen is still fit for purpose. The unexamined life is not worth living, and all that.

In a story I'm working on at the moment, there is a lot about the Victorian poor. I am not standing on a box saying 'look, kids, you can see this happening around you.' But the perceptive child will think, 'Hang on, I've seen people sleeping in subways. That's not just what happened 150 years ago. But the people sleeping in subways now aren't sort-of dead. Are they?' The book does have satirical intent. Whether that will make it hard to publish, I don't know. You can never tell why something is or isn't published.

So - allegory and satire in children's books. Dangerous and insidious? Corrupting and brainwashing? Or encouraging the next generation to examine their socio-political context and think about the issues society expects them to miraculously know about at age 18 when they get their voting card? What do you think?