The elephant in the writing room 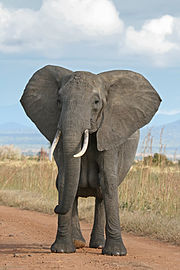 "Write what you love, with no thought to whether it's what the market wants."
"Write with passion - don't worry about selling it."

How many times have we heard this? We heard it reiterated again, more than once, at CWIG (the Society of Authors Children's Writers and Illustrators' Group conference). That's all very grand and noble and swilling with creative integrity - but it's not very practical if you need to live by your writing.


It highlights the big divide in the writing community that no one ever discusses. So I'm going to invite the elephant to step out of the corner and introduce himself: the divide between those who have to live by their writing and those who can indulge in writing whatever they want because they have an independent income, accumulated riches from an earlier career, a large pension, a lottery win, an Arts Council grant, a wealthy spouse, or a 'day job'.

A very few people are able to write exactly what they want and, because it coincides exactly with what the market wants, can make a good (enough) living from it. Super. I'm *so* pleased for you, genuinely. Remember, though, that markets change. The people who sold crateloads of books a few years ago sometimes can't get a contract now. They have not become bad writers; the population has not suddenly gone off their books. It's just that what publishers want to buy changes.

Let's suppose Roald Dahl didn't die, but went into hiding. And now he submitted a book outline, under a false name, to a children's publisher. What are the chances of his book being published? Slight, I'd say. There's too much that is violent or scary for most publishers of books for 8-10s now. Fashions (and sensibilities) change.
So what about those of us who have children to feed, a house to run, and no high-earning partner willing to let us off our share of contributing to the household income? We either have a different day job, or we write other things as well - things that sell but are perhaps not our overriding passion. You could see it as a different kind of day job. I am a writer, and my day job is also being a writer.

Unless you are mega-successful or very prolific, you can't make a living just by writing what you like best. Let's suppose you are lucky enough to get a two-book deal with a £50,000 advance. (That's pretty lucky, these days.) You take a year to write each book (some people do). So that's £25,000 a year. Now give your agent 15% + VAT, which is £4,500 and we're down to £20,500, which is already less than the average wage - and expenses have to come out of that. My annual expenses vary hugely, but are never lower than £3,000 so let's use that figure. Now we're down to £17,500 a year. And you have to get this type of contract *every* two years without fail. And only if your books earn out do you get more. (Plus PLR.) Doesn't work, does it? It's a low enough income to get income support.

If you need more money, maybe you do other things, such as school visits or teaching creative writing. That's fine - but it's no more noble and filled with integrity than writing something you are less passionate about.


Enough of the hypothetical. How does it work? These are the books I have written over the last two years:


So that's a total of 26. OK, some are very short. But no matter. It's still a fair number. (As we're going for full disclosure, I've also written part of a book that has several authors, done a bit of copy-editing and critiquing, been an RLF fellow, an RLF lector, taught an 8-week undergraduate summer school on creative writing, built a few websites, and made two book trailers.)

I'm not going to tell you which of those books I was passionate about, but I did draw up a table of passion-against-income for each of them. I have estimated total royalties likely and have ignored PLR, so the income bit is not wholly accurate, but it gives an idea. So, in terms of percentage of income from writing, missing out one book that doesn't have a publisher yet (but is 10 on passion) and missing out the partial book, here's the breakdown:


There really are two classes of writer. Those who can afford to spend years on a book and accept a tiny advance are not professional writers. They may be published, and popular, and very good - but they are recreational or part-time writers. Professional writers need to worry about margins and expenses and need to negotiate good deals with their publishers. The recreational writers are no less 'real' writers, but their position is different - and they have no right to claim moral superiority or greater integrity on account of that position. Those of us who need to earn a living are not 'selling out'. A book should be judged on its own merits, and a writer shouldn't be judged at all.