The flipside of PLR: the books people don't want to buy

The media have just started their annual assessment of what can be learned from the library loans (PLR) statistics. The answer is - not entirely what they think can be learned. Someone needs to teach these journos about statistics. An article in the Guardian, for example, claims that fiction totally dominates borrowing because  most of the top 100 most-borrowed titles are novels. That doesn't follow. Bestsellers are less of a thing in non-fiction. There could be more non-fiction loans in total than fiction loans, but just spread over far more books so that few make the top 100. Indeed their table of 'loans by genre' puts fiction in second place (largely because they didn't include children's fiction, probably - but no matter).

But that aside - PLR figures tell you which books people borrow. Or, looked at another way, they tell you which books people don't buy. The Guardian is surprised that the only cookery book in the top 100 is Jamie Oliver's book on cooking for cheap (laughable, really, as his view of cheap is not everyone else's). That's not at all surprising. On the whole, you want to have a cookery book in the house so that you can use it again and again over a period of years, not borrow it for a couple of weeks. Cooking for cheap (whatever it's called) is an exception, and  is presumably borrowed because the book is so expensive that people who want cheap food can't afford it. (£26! WTF?)

The books people borrow from the library are those they can't afford to buy or don't want to buy. Some people can't afford any books (or think they can't - some just have different priorities) and so borrow anything they read. Then there are people, including me, who will borrow books that are very expensive and which they don't expect to use repeatedly. I do occasionally buy books that cost over £30 but I try not to. 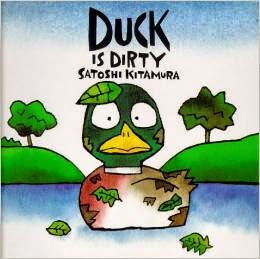 Children's books are heavily borrowed. This is good, of course, as the children get to read the books. But it also indicates that people are unwilling to buy books for their children. Fine, many kids get through books at a rate of knots and it's too expensive to keep up with them. But that's not all that's going on. There is a perception of value related to book length. Picture books in particular are heavily borrowed - often because people think it's 'not worth' paying £5 or more for a book that's only a few pages long and has few words. I won't even go there. I've read the 19 words of  Duck is Dirty about 200 times in the last fortnight. And will read them again and again and again over the coming months. Plus all the times I read them 23 years ago, and 19 years ago. That was money well spent. Looking at my own PLR figures, I get way, way more PLR on very short illustrated children's fiction than on anything else.

What else don't people want to buy? Blockbuster/bestseller novels they would read once and give to the charity shop - hence Dan Brown being top of the 'not bought' chart. Obviously lots of people do buy these books - that's why they are bestsellers. But if I ever felt the need to read a Dan Brown novel, which I can't see happening, I would be quite likely to borrow it from the library and leave my book-buying budget for books I will value more and want to own.

Anyway, the cheque should come soon, so I shall be happy enough to benefit from people not wanting to buy my books. I hope those who don't get very much PLR are comforted by the thought that there are not many people who don't want to buy their books.
Posted by Stroppy Author at 10:59