From Concept to Copy - by Mary Hoffman 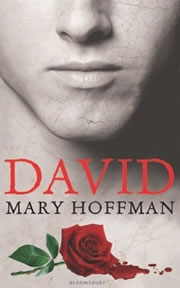 (via all sorts of other C-words, like Contract, Cover, Copy-editing, Coffee and Confusion)
Today we have a rare guest post as I'm honoured to be a stop of Mary Hoffman's blog tour for the launch of David (4th July, Bloomsbury - buy it!). This puts Mary in good company as the only other guest to date has been a pirate. And even then he was hijacked, he wasn't really a willing guest. Sadly, Mary, the pirate was not Johnny Depp. Or actually, I don't know - he might have been. I've not seen him.
But to the point. David is Mary's latest stand-alone historical novel and its ravishing. It follows the scurillous and exciting story of the model for Michelangelo's statue David - a character whose real name and history are unknown, so there?s plenty of scope for conjecture and imagination. As always, Mary's historical research is painstaking to the point of agonytaking and the book is beautifully atmospheric and vivid as well as exciting. Hey, there's sex and intrigue and spying and violence and art. What's not to like?
I'll hand over to Mary now, who explains the process of getting David from an inspirational spark to a book in the shops.