It's one of those days when I love my job.

I just sent an email to my editor that included the line 'the ethnicity of the ostrich is not recorded', and spent the afternoon doing picture research to brief an illustrator who needs to show an ant with cordyceps (parasatic fungus) growing out of its head, one of Damien Hirst's sliced cows, and a Timurid war elephant. Actually, he'd got the war elephant spot on.

The cordyceps grows from a spore inside the ant and turns it into a zombie. Eventually, the cordycep bursts through the ant's head or body and spreads more spores to other ants. The infected ant has the sense to get well away from the nest before its unfortunate day with the spores to minimise risk to its co-ants. It's not a pretty sight.

Damien Hirst doesn't need much explanation. Anyone with a power saw, a herd of cattle and set of oversized tanks of formaldehyde would do the same, surely? 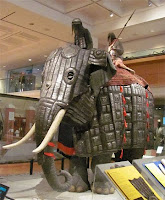 The elephants were cunningly scared away by Timur's trick of setting light to camels and sending them crashing into the approaching elephants. Not so good for the camels, so probably not one to try if you wish to re-use your camels later.

The ostrich? Well, an Italian-American called Ping Bodie once won a pasta-eating contest against an ostrich called Percy. Percy fainted after the 11th plate of spaghetti. The ethnicity of the participants was a topic for discussion as the (very fine) illustrator had drawn Ping using chopsticks, probably misled by that very Chinese-sounding name. But, no - Ping was a professional basketball player, as Italian-American as they come.

All from page proofs of Revolting Records, for Barrington Stoke, published in August (I think).. Because I wrote it a while ago, I could enjoy it all afresh. And realise again how much I do like this job, even if I grumble about it from time to time!

A not-so-stroppy author.
Posted by Stroppy Author at 08:04