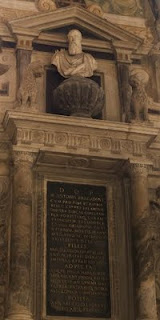 BookMaven has blogged about the Albigensian massacre of 1209 which features in her latest book Troubadour (out Mon 3rd August) - an 800-year anniversary that has gone unmarked and unmourned. (You need to know that BookMaven is Mary Hoffman if you want to order the book, which you should.)

She says her post is a memorial or a plug, but I think I recognise something else in it, too (though I may be wrong). Writing about real historical events in which real people died can make the writer feel a bit uneasy. On the one hand, we are bringing their memory to life, acknowledging their lives and their suffering for a fleeting moment, hundreds of years on. If even one person thinks of them, and perhaps reflects on how their fate relates to current events, we have done a Good Deed.

But at the same time, I personally feel slightly uneasy appropriating their tragedy for a book that will be an entertainment. Would they approve? I think on balance that they would - better to remembered than forgotten - but respect and an acknowledgement that their tragedy was real, not just a story, are a vital courtesy we must afford the dead. 'My' group of dead are the 32,000 who died of plague in Venice in 1576-7. Every time I go to Venice, I light a candle for the plague dead and a candle for Marcantonio Bragadin, who I've also appropriated. I'm not a Catholic, nor even a Christian, but they were, so it seems right. (Marcantonio was brutally executed by the Ottomans while defending Venetian interests in Cyprus. He was flayed alive, and his skin is now in Santi Giovanni e Paolo; that's his tomb above. He - or at least his skin - is also a character in Michelle Lovric's splendid The Undrowned Child.)

Writing about the past is very important. It is easy to think that the 'past is a different country' and that people were not the same. People may have done things differently then, but they felt and thought and hoped in the same ways as now. It is the job of historical fiction (and historical non-fiction) to show us that a person in 1209, or in 2009BC, was just the same in all important regards as a person in 2009. It is our shared humanity that makes their stories matter to us. Don't believe that people were immune to the harshness of their lives, did not feel and fear the famines and plagues that ravaged their lands, or got used to their children dying - read Ben Jonson's On My First Sonne, or Lear's speech on the death of Cordelia if you doubt that they felt such tragedies as strongly as we do.

Farewell, thou child of my right hand, and joy;
My sinne was too much hope of thee, lov'd boy;
Seven yeeres tho' wert lent to me, and I thee pay,
Exacted by thy fate, on the just day.
O, could I loose all father, now. For why
Will man lament the state he should envie?
To have so soon scap'd worlds and fleshes rage,
And, if no other miserie, yet age?
Rest in soft peace, and, ask'd, say here doth lye
Ben. Johnson his best piece of poetrie.
For whose sake, hence-forth, all his vowes be such,
As what he loves may never like too much.